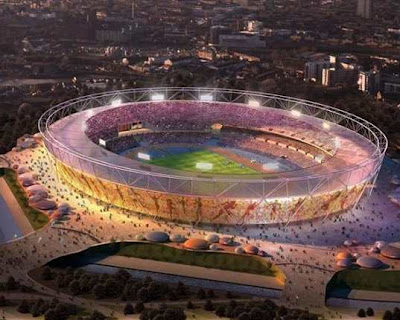 Not a shot in the dark
This headliner from Inhabitat.com yesterday definitely took me some time to digest – “London’s Olympic Stadium to be made out of knives and guns!”
I know, I was taken aback for a moment too. My initial reaction was, “Would I really want to sit in a stadium made from these horrible things? Will that bad Chi ooze from the seats and seep into me??” But after further reading and thinking about it some more, my stance changed. Sure these fighting instruments confiscated by the Metropolitan Police Department were made for that intention. But now, they’re being given a second chance. A chance to redeem themselves in a higher form – an Olympic stadium that will house international athletes who are upholding the idea of sportsmanship and, hopefully setting the example for international peace relations.

Subjects awaiting their higher purpose
How could I not admire the designers Populous’ commendable effort to design an eco-stadium that utilizes “a minimum number of materials and resources in order to have a lower environmental impact?” That truly is a fantastic example of converting the energy of something not so positive by changing the intention of its usage. Well done our British friends! Keep calm and carry on!

9 Tips for a Sexy & Harmonious Bedroom

Plus. I'll send you monthly Feng Shui tips so you keep your life energized and flowing!

Susan is offering free 15 minute calls to whoever needs it right now.⁣ Use the call to talk about whatever you like - your space, your life, your anxiety, the uncertainty, your goals. ⁣No judgments, just an ear or some advice if that is what you choose. ⁣Move energy, however slight. PLEASE SHARE if you know someone who may need this!